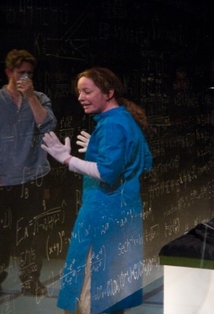 
From the Show Showdown blog:

"In August Schulenburg’s wonderful new play, DEINDE, a Flux Theatre Ensemble production, it’s 2051, and a virus is decimating the human race. Scientists at QuamBi are striving desperately to find a cure, but the virus mutates so quickly that they can’t keep up. Then they are given access to DEINDE, the Dineural Entangled Intelligence Network Device, which allows them to merge their minds with computers, thereby increasing their brains’ processing power exponentially. “What this means,” explains Nabanita Ghosh (the calmly excellent Nitya Vidyasagar), “is we can finally keep up with the virus, its mutations, that line we can’t cross because the math is too small or too fast.”

“Diende is intelligently directed by Heather Cohn, who mines the emotions and themes of the plays, guides her wonderful cast to wonderful performances, and manages the traffic of changing scenes in a way that actually adds to the play’s momentum (this may sound like a trivial thing to mention, but badly staged scene changes can damage a show); I would only wish that some of the tricky sight lines had been dealt with better. Isaiah Tanenbaum, an actor who is always a pleasure to watch, reaches new heights here in a very demanding role. Sol Marina Crespo makes much of a relatively small part; Rachael Hip-Flores starts a little weakly but ends up giving a strong performance; and Alyssa Simon nails the monologue discussed above.”

“The Tony Award nominations were announced today. What a pity that they are limited to Broadway when there is work of this caliber being done just across the river.”