The Marriage Of Alice B. Toklas by Gertrude Stein (NYT Critics Pick) (2017) back to projects 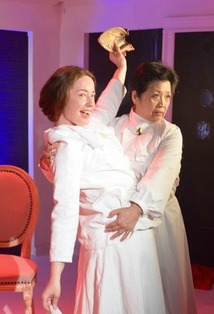 The Marriage Of Alice B. Toklas by Gertrude Stein (NYT Critics Pick) (2017)


"CRITICS PICK in the New York Times!
“As brilliantly phrased by Ms. Simon, [Toklas’] gnomic utterances take on as much emotional depth as Stein’s manner of speaking denies them, and surprises us in revealing the cost beneath the camp….Mr. Einhorn is interested in borrowing Stein’s compulsively reiterative prose style for its intrinsic delight. To that extent, this ‘Marriage’ is a silly aural pleasure…What makes the insight fresh in Mr. Einhorn’s play, is the absurdist language in which it’s told. And what makes it painful is the understanding that in every marriage, someone is the genius, someone not.” -Jesse Green

A marriage farce in which four actors play over thirty characters. Identities are merged and submerged. Written in a style that echoes Stein’s work, this is a comic fantasy with serious intent.