The Golfer (NYIT Winner For Best Ensemble) (2016) back to projects 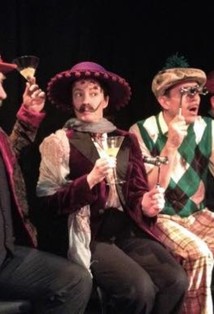 “There is no American writer more thoughtful – in an explosive and surreally comic kind of way – than Brian Parks.” – Joyce McMillan, The Scotsman

In THE GOLFER, Flynn is an office worker whose one escape from the drudgery and pettiness of his office is a weekly round of golf. A lightning strike on the first tee, though, thrusts him into a strange alternate world, and onto an antic trek to escape its surreal clutches. As Flynn bounces from one peculiar encounter to the next, he meets odd people from his past, as well as such characters as Charlemagne, the Wife of Bath, the Tooth Fairy, the strange Posh Trio, and a Choir of the Eels, among many others. With 66 characters and 53 scenes, The Golfer is a fast-paced comic jaunt.

Brian Parks’s other plays include Americana Absurdum, The House, Goner, The Invitation, Imperial Fizz, American Poodle (Splayfoot), Suspicious Package, and Out of the Way. His work has been produced in New York City and several cities across the U.S., as well as internationally in London, Edinburgh, Ireland, Adelaide, Heidelberg, Berlin, Frankfurt, Cologne, and Oberzeiring, Austria. Americana Absurdum won the Best Writing Award at the New York International Fringe Festival and a Fringe First award at the Edinburgh Festival Fringe; it was also staged at London’s Menier Chocolate Factory theater. Imperial Fizz has been published by Josef Weinberger, Ltd., London, and The Invitation has been published in the collection Plays and Playwrights 2010, by the New York Theater Experience.

Ian W. Hill has been part of Indie Theater in NYC since 1989, creating theater as Gemini CollisionWorks since 1997, and working in collaboration with Berit Johnson since 2000 — including their landmark productions of Even the Jungle (slight return), Ten Nights in a Bar-Room, and the noir fantasia World Gone Wrong. Besides original plays and collages, GCW has produced works by Richard Foreman, Mac Wellman, Clive Barker, Rainer Werner Fassbinder, Vaclav Havel, Eugene Ionesco, Shakespeare, John Whiting, Trav S.D., Marc Spitz, Julia Lee Barclay, Jeff Goode, and Dean Haspiel, among others, and is known for its creative use of text, light, sound, music, and projections.